Writing Advice: 5 Things I Wish I Could Tell My 20-Year-Old Self

I sometimes wish I could offer the 20-year-old version of me — the one just getting started — advice about writing based on what I’ve learned over the last two decades. Considering the mistakes I’ve made, and what I’ve learned from them, I could give myself a good head-start.

While my mistakes were plentiful, five stand out as being particularly useful lessons to a writer just out of the gate. Here’s the writing advice I’d share with the younger, more energetic me. If you’re a new writer, perhaps it will be useful to you as well.

1. Write as often as you can, every day if possible

We all practice things to become better at them, even when we don’t feel like practicing. If you play an instrument, you try to practice as often as you can to become a better musician. Why is writing any different?

For most of my writing career, however, I never wrote very much. I’d produce a story or two each year, maybe 25,000 words total. If I wrote 30 or 40 days in a given year, it was a lot. During the first 21 years I was writing, I sold a story, on average, once every three years.

Writing every day gives me the practice I need to become a better writer. I think it shows. During the last two years, I’ve sold a story or article once every 45 days on average. Practice helps. I shudder to think how much better I might be today if I had been writing every day for the last 23 years.

2. Find a writing group that will read what you write and give critical feedback

When I started writing, it never occurred to me to show what I wrote to someone else for critical feedback before sending it off to a magazine. For the most part, I was the only one making critical assessments of my work, and — as it turns out — I am not my best critic.

In 2008, I attended an online science fiction writing workshop run by James Gunn at the University of Kansas at Lawrence. This was my first real exposure to workshopping stories, getting vital critical feedback (as well as giving it), and using that feedback to improve my stories. After completing the workshop, I saw a notable improvement in my stories, and began selling more of them.

In 2010, I joined a local writing group in Arlington, Virginia, through Meetup. I’ve been a member of that group ever since, and the critical feedback I’ve received from the group members has been among the best lessons I’ve received as a writer.

Plus, it’s nice to occasionally hang out with people who get what it’s like to be a writer.

3. Don’t bother your favorite writer by asking him to read and comment on your latest masterpiece

Yes, I did this. I didn’t know any better. I know that’s not a good excuse, but it’s the truth. Sometime in 1992 or 1993, I sent one of my stories to my favorite writer at the time — Piers Anthony — asking for feedback. Looking back on it, I am horribly embarrassed that I did this.

I was fortunate. Mr. Anthony not only wrote me a pleasant reply, but he included a critique of my story. I imagine there are other writers who would not have been so genial.

These days, I am occasionally the recipient of such requests. For several years, I did my best to give what feedback I could; I saw it as my penance for the sin I’d committed. But if I could have a do-over, I would grab the younger version of myself by the lapels and scream, “DON’T DO IT!”

4. Don’t be afraid of rejection

When I started out, I was a little afraid of rejection. I got used to it pretty quickly as my pile of rejection slips grew.

I also learned that (at least in my case) they were never personal. No one ever wrote, “This story is terrible. Don’t give up your day job.” For a long time, the rejections were just form letters.

What surprised me — what I didn’t expect — was my fear of acceptance. The first time I sold a story, I was thrilled. As it got closer to the publication date, however, I grew nervous. After all, when a story is rejected, only the editor or slush reader sees it. When a story is published, an entire audience can see it — and judge it. That was nerve-wracking the first couple of times. But I got over that fear, too.

This judgment also comes in the form of reviews and criticism, both formal and informal. An informal criticism, for example, is when a coworker reads a story of yours in a magazine and says, “Even I could have written something better than that!”

Looking back, the real value of rejection was building a thick enough skin to survive the slings and arrows of acceptance.

I’ll admit it: when I started out writing (and for quite a long time after that) I thought an editor’s role was to reject stories. Or maybe correct a spelling mistake. Or poor grammar.

When I began to sell stories and actually work with editors, I learned the truth: An editor is like a coach standing on the sidelines, helping your writing look and feel as good as it can be.

The first editor I worked with, Edmund Schubert, editor of InterGalactic Medicine Show (and a very good writer in his own right) worked patiently with me on the story he eventually bought. I tried to learn from that experience.

Dr. Stan Schmidt at Analog Science Fiction would send me page-long rejection slips describing what was wrong with the stories I sent him. I tried to learn from those, and not make the same mistake twice. After three such rejection slips, he bought a story from me.

Every editor I have worked with, whether fiction or nonfiction, has been a great help, and made my story or article better than what it was when I submitted it. These days, I try to learn something from every interaction I have with editors.

What I’ve learned most of all is that editors are not there to reject stories. They are there to find the best stories, and work with the writer make them even better.

Writers, what do you wish you could tell your younger selves? What advice would you share with a writer who’s just getting started? 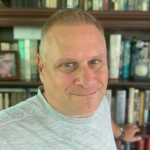 About the Author: Jamie Todd Rubin