One of the great perks of being a freelance writer is the possibility of taking your work with you, wherever you go.

But a few conditions make certain cities more conducive to a productive freelance life than others.

Good internet, a creative and innovative atmosphere, plenty of co-working spaces or other good places to eliminate distractions and write, and a low cost of living are essential elements for many freelancers considering leaving their home bases and starting somewhere new.

From North America to Europe, Latin America and Asia, here are some suggestions for cheap places to live that are great for the freelance lifestyle.

Although once called the most dangerous city in the world, the situation has changed in Medellin. Colombia’s second-largest city has more recently been called the world’s most innovative city.

Lisa Imogen Eldridge, a British travel writer, lived in Medellin and raves about it.

She says you can share an apartment with views, a pool, sauna and security for around £200 (US$257) a month, and have an organic food delivery for £20 (US$25) per month. The WiFi connection is fast, and there are lots of great cafes for working in and meeting people during working hours.

This city in northern Thailand is a favorite among travel bloggers and digital nomads.

While this means you won’t be the only foreigner in town, it does mean there is plenty of support for the freelance lifestyle. Plus, it’s pretty, has a good climate and is cheap!

Forbes Magazine cites rents in Chiang Mai as starting at just $100 per month. Food is also extremely cheap, and there is a large network of entrepreneurs in the city with whom to bounce ideas off. Meet-ups and conferences in different industry niches are frequent.

While cities in Western Europe may never be as affordable as some in Asia or Latin America, for freelancers who want or need to be in Europe, the German capital is an excellent choice.

Rent prices in Berlin are extremely affordable — cost of living index Numbeo lists a one bedroom apartment in central Berlin as costing around US$625 per month, as opposed to $2000 per month in a nearby European capital, London.

And of course, if you have a European Union passport, there are no restrictions on living and working in Germany (although citizens of the UK may need to act fast if they want to make the most of this undeniable benefit of being part of the EU).

Portland is one of the best cities in the USA to embark on a freelance career, for many reasons. A large proportion of its inhabitants surely agree, as 16 percent of the city freelances for a living.

Aside from the great outdoor and leisure pursuits nearby, the city has a low average cost of rent ($960 per month).

The Mediterranean city of Tel Aviv is known as one of the hippest cities in the Middle East, even being called “the essence of cool” by Forbes Magazine.

While some areas of the city are cheaper to live in than others, American expat Jaclyn Mishal points out that Tel Aviv is known as one of the best start-up hubs in the world for good reason.

The city is full of cafes and co-working spaces, and South Tel Aviv is the perfect place for freelancers on a budget. Health insurance is free, or nearly free (up to $50 a month for tourist insurance), which may be a massive draw for U.S. freelancers.

It would be difficult for non-Jewish people to live in Israel permanently, but working there for a shorter period is not so hard, according to Jaclyn.

A 2017 survey by Dutch freelance platform Hoofdkraan ranks the Portuguese capital as the best city in the world for freelancers.

While such statistical surveys should always be taken with a necessary pinch of salt (one freelancer’s heaven may be another’s hell), is seems  Lisbon does have a lot going for it.

It is cheap, the internet is fast and the environment is attractive.

If Lisbon doesn’t appeal for some reason, the Portuguese city of Porto also featured on Hoofdkraan’s list, at number 10.

It’s worth keeping in mind that depending on your passport, it may not be possible to stay in some of these destinations long-term. But that might be ideal if you just need a temporary change of pace, or if you need to reduce your cost of living while transitioning into a full-time freelance career. 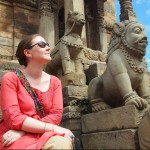 About the Author: Elen Turner

Elen Turner is a Kathmandu-based travel writer and editor, whose work focuses mainly on the South Asian region. Learn more about her work at her website: Wilderness, Metropolis.