As a screenwriter, you want to spend most of your time writing and less time worrying about typeface and line spacing.

And in TV, where every line counts, and people are waiting on your pages to shoot, you want to be able to type away without worrying about whether you’re maximizing every last space and margin.

As a script coordinator on award-winning television shows, I’m responsible for tracking revisions, editing for continuity and helping find trims and cuts to make that page count — so I’ve come across many different screenwriting software tools that can take your script from the writers room, to set, to post.

Screenwriting software, including some free options

Lights, camera, write! With so many options fro scriptwriting software, it can feel overwhelming to pick one — especially with varying price tags.

We’ve rounded up the most popular screenwriting options for every budget to help you write your next Oscar (or Emmy!) winner. Or at least finally finish that script you’ve been working on.

Here are some of the best script-writing software:

Final Draft has been on the market since 1991 and has long since been considered the industry standard.

It’s used by heavy-hitters like James Cameron, J.J. Abrams and Matthew Weiner, and is the number-one selling screenwriting software in the world, available for Windows, Mac, and iPad.

Natalie Bounassar, television writer and blogger, is quick to recommend this above all other options: “Final Draft is my screenwriting software of choice. It’s an intuitive program that takes the work out of the technical process of crafting a script and allows you to focus instead on your creative process.”

And she’s right: using one of the company’s 100 templates, you can create screenplays, stage plays, teleplays for any project you’re working on. The software even provides glimpses into how Emmy-winning dramas like “Game of Thrones” or “Better Call Saul” are formatted, making your spec writing a breeze. If you’re working on a comedy sample, there are templates available for this too, including the formats for “Veep” and “Silicon Valley.”

In addition to being the industry standard for personal writing, Final Draft is popular in TV writers’ rooms across the business. Because of its ease in tracking revision pages, many of your favorite TV shows require staff to use this program as scripts are brought to the screen. Final Draft has an excellent customer service support line to support these writers for bumps along the way.

But it’s also the most expensive screenwriting software available, and it has been slow to adapt to include newer features that programs like Scrivener and WriterDuet offer.

Final Draft 11 has been particularly challenging for many writers, as these Amazon reviews point out (including issues opening documents made in Final Draft 11 with any earlier versions).

However, Final Draft 11 offers a live chat function that allows you to write and edit with your partner in real time, and you can save your files using Dropbox and iCloud, though it’s not as effortless as in some other programs.

Billed as “More than just your final draft,” Fade In offers the powerful tools screenwriters expect without a lot of the extra fluff that makes programs like Final Draft slow to learn and use.

Like the end credits of a movie, Fade In’s interface is primarily black and white, which is easier on our exhausted writer’s eyes. You can import and export files made with other programs,  making it easy to collaborate with people using, say, Final Draft or MovieMagic. Reversely, Fade In allows you to save your own files in plain text so you can open using another program later on.

Fade In also offers robust organization (color-coding, index cards and marking significant sequences), a Dialogue Tuner (to see and edit a single character’s dialogue all in one place) and report downloads (scenes, cast, locations, and more).

Fade In is the most compatible and user-friendly of these options, and it comes with all the bells and whistles an expensive program like Final Draft offers. While this program is great for personal use, it’s not used industry-wide, so you might have to use a different program for some projects.

One of the great things about Arc Studio is you can collaborate with other writers in real time, similar to Google Docs. You can easily export your screenplay as a PDF or .fdx file for sharing and collaborating with others. It also allows you to access and write your screenplay from the downloadable software, or in your browser, or from the iOS app on your iPhone or iPad.

Arc Studio offers an intuitive outlining tool for breaking your story and figuring out your characters’ arcs. And it has automatic cloud storage with the ability to save to Google Drive or your hard drive.

If you need production tools like colored pages and starred revisions, you won’t get that with this tool, though the company says those features are coming soon.

Cost: Free, with option to upgrade to the $99/year Pro version

Celtx features are pared down, but their free version offers formatting for screenplays, storyboards, catalogs and more. The paid versions also work in tandem with its mobile apps so you can work offline and on-the-go.

Web-based Celtx Edge uses a collaborative model that allows an entire production team or scriptwriting class to collaborate on a project via browser. Celtx also includes the ability to change formats, so if you’re writing a stage play that you suddenly realize would be great as a short film, Celtx can easily convert between formats.

One thing to look out for when using Celtx is it will often incorrectly format characters, parentheticals and stage directions. In a cutthroat industry where every punctuation counts, you’ll have to do a thorough job checking your script after it’s saved as a .pdf file before sending it to other professionals in the industry.

Cost: Free, with upgrades available for maximum of $19.99 per month

WriterDuet’s motto is “You don’t need to spend $200 just to fit in” and the company’s features prove it values script content over formatting. It’s one of the first screenwriting programs on the market to offer simultaneous writing and editing options for you and your writing partner, and its this feature that users cite as the reason they prefer it over Final Draft or Movie Magic.

WriterDuet has a neat feature to help shorten your script by automatically searching for places where you can cut a few lines. Same thing for error-checking: The software finds incorrect formatting, typos, characters with similar names and more.

You can even analyze your script by reviewing statistics on action versus dialogue, density and how characters speak.

WriterDuet has cloud storage with the ability to save to Dropbox, Drive and your hard drive with additional automatic backups.

Cost: Free version, with option to upgrade to the $99 Pro version, as well as student pricing

If your work goes beyond screenwriting, and includes other types of writing like fiction, Scrivener’s your best bet.

The popular tool offers formatting options for all of the above, but with the added bonus of being able to visualize scenes that need to be grouped together. Novelists swear by its ease of use and enjoy the benefits of this highly-visual platform. Scrivener’s corkboard feature allows you to make sense of all your notes and scenes — almost like creating a storyboard.

If you plan to take your script through filming, Scrivener falls short for long-term use. Users indicate that collating pages into a pdf, a seamless process in Final Draft, is far more complicated when used here. While great for character development, research and structure, it’s not compatible with the software producers and directors use to actually turn a script into a movie. You’ll need to convert your screenplay into another format, making it sluggish for last-minute rewrites.

Check out Scrivener’s tutorials or consider investing in a course like Learn Scrivener Fast, which will teach you everything you need to know to become a master of the tool.

Movie Magic is the official screenwriting software of the Writers Guild of America East, but some people in the industry consider it old-school.

Like almost every tool available, Movie Magic automatically formats your script to industry standards, and it offers many of the same perks as Final Draft. You can quickly change the layout of the interface to have as many or few distractions as you want.

It’s also one of the only softwares that offers, in addition to TV and Screenplay templates, novel, comic book writing, and radio play (ie, podcast!) formats, making it a “one-stop shop” for whatever kind of writing you want. And you can collaborate with other writers online in real time using iPartner.

However, while Movie Magic was once the industry standard, it has lessened in popularity as other, more innovative tools have come on the market. It doesn’t offer a direct import for Final Draft documents, so keep that in mind if you’re working in a television writers room with Final Draft users.

You never want to give someone a reason not to read your script, and when the difference between “consider” and “pass” could be just a few formatting issues, make sure you have a program that takes care of that for you! That allows you to focus on the important part, the writing.

Whether you’re a writer’s-room regular or a student working solo, find the tool that makes the most sense for you, learn it well, and stick with it.

Are you a screenwriter? Which tools do you find most useful?

The original version of this story was written by Marian Schembari. We updated the post so it’s more useful for our readers. 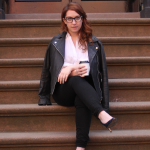 About the Author: Bethany McHugh

Bethany McHugh is a coastal hopping writer, currently based in New York. She moved from working in development at a major studio to join the writers room on shows such as THE AFFAIR (for Showtime), and the upcoming P-VALLEY (for Starz). She’s currently working on the upcoming season of GENIUS: ARETHA, for National Geographic.