I hadn’t written much this summer, yet the ache to write had been my constant companion.

It hovered in my back as I packed and unpacked boxes and suitcases. It lingered in my legs as I tread water with my kids in the pool. It sat on my shoulders at family gatherings. It took up space in my head already crowded with too many thoughts about too many things that matter too little.

So to relieve the ache, I wrote.

I wrote in phrases during stolen moments of guilt while my kids stared at iPads; distracted moments watching Simone Biles and Michael Phelps be truly great at something; short moments when I thought I might find my groove. (I didn’t.)

The result: a combination of phrases that alone are sentimental and cliched — taken together are paragraphs of sludge connected by a web of confusion. I’m trying too hard; a magician looking for a rabbit without my hat.

The best stories are seemingly simple, but textured with subtle nuance and complexity. I have simple with no texture; texture with no story. I can’t find the story in anything.

When writer’s block settles in

I read haunting stories about mothers losing children and stories of summer so rich in detail, I smelled the salt in the sea air without leaving my chair. How did they do that? How were they able to create scenes so vivid, stories so poignant, they STILL stick with me?

I’ve been writing for a long time now. I’ve been here before. We writers know this spot well. Self doubt, self consciousness, jealousy, envy. These terrible friends lure you into the giant black abyss that swallows Great Ideas and Inspiration.

I waited until I felt like I might drown in all the world’s noise and all the emptiness filling my brain. Things got quiet and I heard them, as I usually do — those rhythmic messages the universe sends at exactly the right time.

Over the course of a few days, I heard it in a variety of forms, voices and manners: if you really want something, you’ll figure out a way to get it. The world was whispering directly to me, “If you want to create magic with words, Kathleen, stop looking for a rabbit and just write.”

I started writing this.

No one cares. I don’t care.

If you really want to feel validated as a writer, then just write.

But is that it? Is that what I want? Why do I have this ache to write?

So I did like any struggling writer does and decided it was suddenly and urgently time to take all the books off the bookshelves I hadn’t touched in years, and sort through ones to keep and ones to donate. Which lead to the dust; thick blankets of grey that needed to be removed and vacuumed. There were stacks of old magazines with no obvious reason for taking up so much shelf space for so long. Did I really think I might go through them again?

Not five minutes into my new and very important project, there she was: Anne Lamott.

“Writing can give you what having a baby can give you: it can get you to start paying attention, can help you soften, can wake you up. But publishing won’t do any of those things; you’ll never get in that way.”

I first read Bird by Bird as a lost and lonely twenty something. I’d started taking writing classes at a prestigious university in Cambridge. I worked a dead end job there during the day — sending emails on behalf of VIPs, ensuring copiers had paper, and wondering if there really was such a thing as a real job.

But once a week, I’d stuff a folder full of my words and sit around a table with people far more intelligent, experienced and talented than I at the “extension school” (an appendage of prestige). I wrote terrible stories. I’m now not sure how anyone read them without wondering what in the world I was doing at that table. I needed a therapist, not a writing course. In retrospect, none of the feedback I’d gotten from fellow classmates or professors was genuinely encouraging, but I kept enrolling in class after class as if the shear amount of time spent might somehow equate to an increase in talent.

The epiphany (all good stories have one)

I don’t know if it’s any good. But I do know it felt good to write it, and maybe that’s all the validation I need. 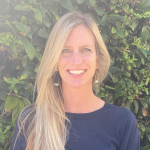 About the Author: Kathleen Siddell