Silence Your Inner Critic: How to Defeat Your Writing Demons

Everyone has their own personal writing demon — and some writers have several of them.

Maybe yours is a lack of confidence. Or it might be that you battle resistance. Perhaps you fight against an inner critic; more than a few writers struggle with the nagging voice of someone from their past who told them they’d never succeed.

No matter which demon you have to battle, no writer escapes the black dog of doom that creeps close and growls when they sit down at the keyboard.

Having a writing demon is so universal that it’s become a trope. Cue the story of the angst-filled creative who can’t get past his blocks… until some unexpected event or person changes everything and unlocks his creative genius.

Wouldn’t it be great to have a miracle like that happen to you? Well, you could sit around waiting for that moment to happen. It’s what most writers do.

Or, you could just take matters into your own hands and slay your personal writing demon from the comfort of home.

How to defeat writing demons

In the movies, defeating a demon requires the dramatic. Common approaches include finding a magical artifact that’s been hidden for eons, or taking a harrowing trip to a fiery chasm. Some massive battle of wills or strength takes place, and at the last minute, all that seemed lost is saved.

You don’t need a magical artifact. No fiery chasm is required. Your writing demon is simply a bully — and as with all bullies, all it takes to come out on top is to stand up tall and not back down.

Here are a few time-tested ideas that always do the trick.

Decide how much power you’re going to give away

The reason a personal demon has power over you in the first place is because you’re consistently giving it over.

The demon didn’t always have power — in fact, it didn’t have any until you started giving it control. Mentally, you created a hierarchy in which you began to believe the demon had all the power… and you didn’t have any. Now you’re at its mercy, letting it dictate your options.

Whenever you encounter your demon, you need to decide whether you’re going to believe what it says or follow its advice. That’s your decision to make — only you have control over that.

Or you can choose to believe in your own free will and ability to act.

You can decide to stop giving your demon the power of an authority figure. You can refute its message. You can refuse to be controlled. Instead, you can start treating it like some random bozo on the street. One who doesn’t know you, and who can’t tell you what to do.

You don’t have to listen to your demon. How much power you relinquish to it is your decision, and yours alone.

Find the easiest way to chip away at its power

Your demon has been around for a long time. It’s conditioned you to hold beliefs that don’t necessarily go away just because you want them to. It affects your confidence that you can be creative, productive and successful.

It affects your ability to write.

You might think that you have to engage in some epic battle against these beliefs to break free. That approach might work, but to be honest, it’s prone to fail.

Your beliefs have strong foundations. They’re not easily toppled. But they are easy to chip away. Instead of using brute force to topple a belief, undermine it by taking small actions that run counter to the idea.

Your writing demon wins because it has you believing global statements like, “I just can’t write” or “My writing isn’t any good.” The universal nature of these beliefs gives them their power.

This is what you can chip away.

For example, the next time you think, “I just can’t write,” chip away at that universal belief. Sit down and write for five minutes. You could write a mere 100 words. You could write on a completely unnecessary topic — anything to get reactivated.

This small step won’t magically turn your writing life around, of course, but it does create a reference point that immediately works to undermine your global belief, and it helps your brain to re-engage. You’ll come to realize that sometimes it’s more difficult to write, and most times, it’s not difficult at all.

And when you think, “I just can’t write!” you’ll begin to realize that statement isn’t true. The voice of your demon begins to lose credibility. Eventually, it becomes a fleeting whisper until the day you don’t hear it anymore at all.

Will it take time? Of course it will. But if your writing has been stalled because of your demon, gradual improvement is better than the zero you have now.

Assign a talisman to remind you of your power

The beliefs you currently have are the result of long-term conditioning. They’re going to be your default pattern for a while. That’s why it’s a good idea to have something at your disposal to remind you that you can break that pattern any time you choose.

In legends, a talisman is an object that protects you from harm. In real life, you can have one, too.

You might choose a “lucky pen” you keep on your desk to remind you that if you just write for 10 minutes, you’ll warm up to the task. It could be a sticky note on your monitor that says, “Everybody starts somewhere.” It could even be a picture of a loved one that you can look at and think, “This person believes in me, and I’m going to believe in me, too.”

The psychological term for this is anchoring; you anchor a particular thought, state of mind or emotion to the sight or feel of an object. It’s a smart thing to do, because it can help you break from your rut when you’re feeling trapped.

Can defeating your writing demon really be so simple?

It’s likely that on your search for the miracle cure that’ll save you from your demons, you’ve encountered all sorts of other writers talking about their difficult struggles and sharing “helpful” advice suggesting a long, daunting road of recovery back to writing health.

Sometimes the simplest advice is best. And even better, not only is this advice simple, but it’s easy to implement.

No matter how long your demon has held power over you, that power is fragile. It was never the demon’s power to begin with — the power was, and always will be, yours.

So the next time your writing demon starts whispering in your ear, use these three simple steps to get the power back in your hands… where it belongs.
Have you battled a writing demon? What strategies or tools did you use? 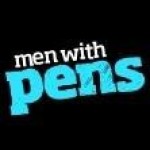 About the Author: James Chartrand

James Chartrand has been a copywriter for more than a decade. She (yes, she) is the creator of copywriting courses Damn Fine Words and Damn Fine Ebooks, is partial to strong coffee and fine Shiraz, loves ice skating, and always has a pair of Nike sneakers on her feet.