What to Consider Before Agreeing to Co-Author a Book Telling other writers that you co-author tends to elicit expressions of both admiration and horror. It’s a reaction that makes me smile, because it’s something I love: the teamwork, conversations, and shared achievements make the co-authoring work I do such an exciting journey.

People often wonder, “How do you do it?”, which is likely a polite way of asking, “Don’t you argue like hell about the plot/dialogue/character development?”

Fair enough question; co-authoring can be challenging, but it’s a refreshing and interesting way to write. Here are a few strategies to help you create a successful and enjoyable co-authoring experience.

Natalie Dae and I became friends through writing and progressed to beta reading for each other, which calls for mutual respect and honesty.

Actually writing together came about by accident: Natalie was having trouble after the first chapter of That Filthy Book

and asked me to take a look. I loved the story and suggested that I try writing the next chapter to see what would happen. She adored where I took the characters and how they came alive, and got right to work on the next section. She emailed it back for me to write more and that was it, we were off!

Be warts and all friends

Make a pact at the beginning of the whole experience not to fall out over writing, whether it’s where to take the plot, what the characters say, or even how it’s going to end.

Be relaxed, be easy-going, be nice and let the story take you on a journey. You’ll be utterly amazed at how the characters can unfold themselves and go in wonderful directions.

The story is the priority, not ego

If something isn’t right, it should go, no matter who wrote it.

If you aren’t prepared to hear constructive criticism on your writing, then co-authoring isn’t for you. Natalie and I go with the idea that “there are plenty more words where those came from,” so we write and write and write, and then each later go in and chop things to bits. Sulking because Natalie took out a couple of “my” paragraphs that were too repetitive would make the book suffer: after a while, she’d likely start leaving them in to save the hassle of my bad mood.

The reader has no idea which sections were written by you or your co-author, and if they can tell, then it’s not a successful co-authorship. Be prepared to hit delete on each other as much as you are on yourself.

Be flexible about timing

Establish guidelines rather than deadlines of when you’ll get your chapter or word count done, and be understanding if daily life causes delays.

Sometimes, though, it’s fun to hammer out a story quickly and be completely in the flow. Natalie and I once wound up sending chapters back and forth at the rate of one a day! This isn’t always going to happen; it’s good to go in with a relaxed mindset of “let’s make this enjoyable” rather than a firm plan.

Let the characters speak to you

Relationship-led plots work really well in co-authoring, as there often aren’t complex, critical plot twists; they’re more focused on emotions. Once you both get to know the characters, they really become the third, fourth, and fifth people involved in the writing process.

Natalie and I have just written a trilogy together and the hero has stolen both of our hearts; if you heard us talking about Victor Partridge you’d think he was a real man we were both obsessed with! Writing solo, it is of course possible to fall in love with your characters, but it’s a wonderful to be able to share that feeling.

Try writing scenes, plots and dialogue that test you as a writer and as a person. Don’t be afraid to go down a darker or more comedic route than you normally would, or try sci-fi if you usually write historical fiction.

The writing, publishing, and promoting process is one big crazy rollercoaster. Working through each step with someone else means you get to share the highs and support one another during the lows. Hold hands and hang on!

Have you tried co-authoring? Would you consider telling a story with another writer? Share your thoughts in the comments! 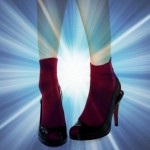 About the Author: Lily Harlem