A “Novel” Idea: How to Write a Book With a Partner When my college best friend asked me to co-write a romance novel, I thought she might be crazy. After all, we lived in different states, and I had never written romance.

But, I was intrigued.

I tend to put off writing by finding more pressing things to do, like staring into the fridge, wondering what I’m going to feed my toddler when he wakes from his nap.

Co-writing seemed like a good way for me to stop procrastinating. I would have a writing partner to answer to on a daily basis. I was also a closet romance reader, something not even an MFA in creative writing had extinguished.

So, off we went, embarking on this collaborating adventure. Four months later we completed our romance novel, in half the time it would have taken me to write the novel by myself.

Co-writing a novel with your best friend is similar to writing one on your own, but with some key areas to think about during the process.

It’s important that you communicate with your writing partner.

Even if you have a lot in common, as I did with my college best friend, being able to speak honestly and clearly is important when you encounter bumps along the way.

Since we lived in different states, we set up a Google Doc and spreadsheet for the project. Using a Google Doc means that everything is automatically saved, sharing is easy and you and your writing partner can edit at the same time.

Your writing will also go more smoothly if you schedule weekly phone calls to go over important thoughts and concerns.

Sharing a similar vision might not happen immediately. During the initial stage of planning, it’s important to clearly define your vision, to make sure both of you are on the same page. Yes, pun intended.

One of my biggest concerns was that we wouldn’t have the same vision for our project. We were different writers. I liked darker Bell Jar kind of literature, and she dreamed of the resurgence of chick-lit.

But remaining open to each other’s ideas helped shape the setting, characters and plot.

Your writing will go more smoothly if you have a strong plan in place.

Before we even began to write, we developed our characters, plot, and setting by communicating and using a Google Doc to keep us organized. We knew that we needed to have a clear idea of the entire story before we begin.

This helped ensure that our vision remained the same and that we could work on different parts at once. Once your plan is in place, you don’t necessarily have to go in chronological order.

If you are sharing a Google Doc to write the novel, you might decide to write at different times.

My partner wrote in the mornings, and I in the afternoons. Most of the time, I would start where she finished.

It was always exciting to see what she had written. Sometimes I was surprised at the direction she had taken or how differently she envisioned a character. Some days I would open the document to spy on her writing.

You might find, as I did, that seeing a writer in action is magical.

5. Establish a timeline to complete the project

It’s a good idea to discuss the timeline and how you plan to complete the project together so you can hit your word count and stay on track.

We set start and finish dates for each stage of the project.

At first, I wasn’t sure we’d be able to finish the novel in four months, but since we had a schedule and I had a writing partner to answer to, I kept to the timeline.

There were times  I disagreed with a choice my partner made. And I sometimes shy away from confrontation.

But I learned that not having to call the shots all the time left me with more energy to write. Another creative mind was taking the story to unexpected places.

You and your writing partner may need to let go of your egos as you collaborate.

7. Be open to criticism

You and your partner are in this together — listen and trust each other.

I’ve sat through my share of writing workshop critiques, so I know the difference between negative and constructive criticism, but I still have to remind myself to listen to feedback.

One afternoon early in the project, my partner completely changed a chapter I had written the night before. Emails flew back and forth. I realized in the end that she was right to have made those changes.

Sometimes it’s the paragraph or chapter you hold on to the strongest that needs to be deleted.

As you share in the ups and downs of your collaborative project, you’ll find that the knowledge that you’re not alone is comforting. Also, collaborating is faster because you’re sharing the work.

Co-writing a novel turned out to be a fun and exciting project that pushed me to stop procrastinating. I loved that the story went to unexpected places that wouldn’t have happened if I had been the only one writing.

By the end, we had a completed novel that we were proud to have written. 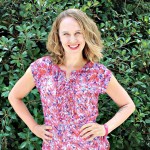 About the Author: Amber Roshay

Amber Roshay is a writer, instructor and traveler. She co-founded Pen and Parent with her college best friend to help people become better writers/parents. When she’s not writing or parenting, hopefully she’s resting.