Writing a Book? How to Know When to Stop Editing and Move On

You’ve done it: written a novel, revised it, sought outside opinions and revised some more. Maybe your magnum opus has gone through endless drafts.

But something’s still not right. Either it’s not shaping up into the book you hoped it would be, or it’s not getting the reception you want from agents and publishers.

It’s tempting to keep re-working the manuscript. I spent years laboring over a historical novel set during a yellow fever epidemic in New Orleans. How many iced mochas did I down in the coffee shops where I did my writing? How many hours did I spent in library archives perusing microfilm copies of 19th-century newspapers? There’s no telling. Even with all that effort, the story never quite worked.

Sometimes, the best thing you can do for your writing career is to shelve your project and begin anew. Here are some things to keep in mind when you’re wondering, “Should I stay or should I go?”

Fail Fast, Fail Often tells a story about a ceramics class. Half the class is graded on the quantity of work they produce, and the other half is graded on its quality. Anyone in the first group who makes fifty pounds of pots gets an A. Anyone who produces a great pot in the second group gets an A, even if she makes only one pot for the whole semester.

Spoiler alert: The students in the quantity group make the best pots. While the quality kids are hemming and hawing over how to make the perfect pot, the quantity kids are experimenting, learning from their mistakes and getting pretty darn handy with mud.

Writers could benefit from adopting this quantity-over-quality mentality, as well as remembering writing is a craft that benefits from repetition.

You may be holding yourself back from your best work

Stephen King is one of my favorite writers, and the man is prolific — he’s penned 54 books. But compare book one (published in 1982) of The Dark Tower series to book five (published in 2003). In between those volumes, he published 26 novels.

King becomes a much stronger writer after he has written dozens of books. Where would the world be today if King had spent a decade polishing Carrie? We wouldn’t have The Stand, The Shining, Cujo, Christine… the list continues.

My debut novel, which comes out next month, is not my first, second or third manuscript. It’s actually my fourth full-length novel. And while it is better than the three that came before it, it is nowhere near as good as my fifth manuscript, which I’m plugging away at now.

Each time, the process gets a little easier and the outcome gets a little better. I’ve learned plotting, pacing, dialogue, conflict, how to cut away the dead weight and recognize the sound of my own voice — by doing these things again and again. If I was still working on the same novel I’d started in 2004, I’d be very much like the proverbial dog returning to its vomit. (It was a really terrible draft.)

Writers often use birth as a metaphor for the writing process. They describe their relationships with their manuscripts as a sort of dead-end romance.

But a manuscript is not a baby. It is not a lover. While I understand why writers develop emotional attachments to something that occupies so much of their time, minds and hearts, this is not a productive way to use your energy. Give those words a beginning, middle and end, and move on.

A lot of writers believe if they “abandon” their manuscripts, they’re admitting failure, that they’ve wasted their time. Starting a new project isn’t failure. In fact, it’s the opposite of failure.

Have you ever struggled with whether you should let go of a project or give it one more revision? How did you make your decision? 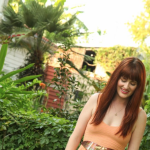 About the Author: Missy Wilkinson