Do you write novels for kids and teenagers? If so, are your novels middle grade (MG) or young adult (YA)?

I write YA novels myself, and I often hear writers say that they don’t know which category their own novel falls into.

This is an important distinction to make. Literary agents are sticklers for making sure stories are classified correctly, and you can’t sell your book if you’re marketing it as something it’s not.

Here are four key aspects to look at that can help you determine whether a story — either yours or somebody else’s — is more accurately classified as young adult or middle grade.

How long should your story be? Word count is important when it comes to figuring out what type of book you’re writing.

However, as Writer’s Digest points out, these aren’t hard-and-fast rules. Think about the Harry Potter books, for example, which are technically middle grade: the first book in the series was 77,000 words, while Deathly Hallows got all the way up to 200,000.

That’s why you can’t use word count alone to determine who a book is geared for. Let’s look at other factors you should consider, too.

A 10-year-old is on a different reading level than a 17-year-old, so the prose needs to be adjusted accordingly.

Middle-grade books are written in simple, clear language; however, they can’t sound dumbed-down, which is why the middle-grade voice is so hard to nail.

Here’s an example of a passage from Misty of Chincoteague by Marguerite Henry:

“The Phantom pricked her ears. She whirled around and almost collided with Watch Eyes in her haste to find the band. She wanted the Pied Piper for protection. Behind her trotted the foal, all shining and clean with its newness.”

Middle grade books are made up of simple sentences that are easy to read. In YA, the prose is more emotional; sentences run on, winding their way across the page, showing emotion — or they stop. Abruptly.

It’s all about creating an experience for the reader and authentically showing the character’s voice.

Take this example from Divergent by Veronica Roth:

“He leans his face close to mine and wraps his fingers around my chin. His hand smells like metal. When was the last time he held a gun, or a knife? My skin tingles at the point of contact, like he’s transmitting electricity through his skin.

‘My first instinct is to push you until you break, just to see how hard I have to press,’ he says, his fingers squeezing at the word break. My body tenses at the edge in his voice, so I am coiled as tight as a spring, and I forget to breathe.”

See how this writing style is different? The sentences are longer, dragging on to create a sense of tension, sounding more lyrical rather than cut-and-dry.

Here’s one more tip about prose and voice: Keep in mind that middle-grade books are very often written in third-person, while the trend for YA is first-person.

In YA, the protagonist typically leaves home while in MG they’re connected to home.

To put this another way, in a middle grade book the protagonist will discover who they are in relation to home. The plot is very centered around the main character’s family and hometown.

By YA, however, the protagonist is ready to strike out on their own — to go somewhere new and discover who they are in relation to the world.

The age of the protagonist plays a part, too, since the main character’s age typically matches the age of the readers.

Generally, a middle grade book has a main character that’s 9-12 years old, while in YA the protagonist can be anywhere from 14-18. (Claire Legrand, who writes both MG and YA books, recommends avoiding writing a 13-year-old main character as publishers aren’t sure what to do with that.) If the main character is in college, the book would most likely be considered new adult instead of young adult.

Violence, language and sex — how much of these components does your manuscript have?

Let’s look at these one-by-one and figure out where the line is drawn.

When it comes to violence, less is more for middle grade. When MG books do have violence, it tends to be of a magical nature, such as the fantastical monsters who play a part in the popular Percy Jackson book series. This type of violence feels more distant than violence that happens in the real world.

YA books are more open to violence and gore; in Six of Crows, for instance, Leigh Bardugo’s character Kaz Brekker calmly plucks out a prisoner’s eye and tosses it overboard into the ocean. Real-world violence such as abuse and other traumatic experiences is also much more common in YA (example: A List of Cages by Robin Roe).

Language in middle-grade books doesn’t go far beyond “damn,” whereas young adult books play a little looser with four-letter words. And many MG and YA books alike use a made-up system of swearing if they’re set in a different world; James Dashner’s Maze Runner series has its own terms, such as “klunk” for “crap” and “slinthead” as a derogatory term.

Words like this can serve a twofold purpose — to help the fantasy or dystopian world feel more real, and to water down a story for younger readers.

Finally, as far as romance, middle-grade books are very chaste; characters might hold hands or even kiss. Young adult books, however, push this further — think of Cassandra Clare’s Mortal Instruments series, where the scenes between Clary and Jace get downright steamy.

In a nutshell, middle grade books are generally PG, while young adult books can be rated PG-13.

With these tools in hand, you can self-evaluate your manuscript and determine whether it’s middle grade or young adult — and then you can feel confident in your decision as you send it off to publishers. 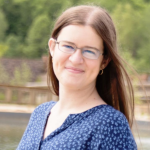 About the Author: Hailey Hudson

Hailey Hudson is a full-time freelance writer based out of Atlanta, Georgia who likes to read, tap dance, and snuggle with her dog in her spare time.