How to Become a Better Writer: Do This (And Only This, Seriously) For 1 Hour

Settle in for a writing hour!

You know what this is, right? An hour for writing, and nothing else.

Make the clay, you’ll shape it later! But, due to the perverse nature of our writerly souls, you may want to weenie out of straight-up writing during your self-timed Hour of Writing.

Here’s a list of things you can’t do during your writing hour.

1. Stop to Google the correct last name of someone you want to write about. You WILL click on other things. It may last an hour, it may last four hours. You cannot, therefore, Google a name. Just say “Andy” and move on.

2. Look to see what made that ding sound on your computer, even when you’ve just done something petty on Facebook and it could be a response. That can wait, like a present you can unwrap later.

3. Stop writing to research. Not for what you’re writing, and not to research the girl you just saw your ex put a photo up of. Even if your research is totally legitimate, in either case, it most definitely, now and forever, written in stone, does not count as writing. You must write.

Research is not writing: it does work toward writing, but you know you’ve set this hour for a reason, and it’s to build the clay that research will help shape. But research alone will be nothing without this clay. SO go build it. It’s made of words and focus and time. This time that you set aside.

4. Make a snack. It’s an hour for crying out loud. Eat before or after. This snack need is just your inner child who can sit in a corner and cry about it for all you like, but you’re not having a snack right now.

5. Pinterest. Nope. No. Not even Pinterest for Writers! Do not pass go and definitely don’t even think about collecting an even $50 freelancer’s paycheck. The very name/word Pinterest should not be even thought while in your writing hour. Stay far away from this magical and enchanting timesuck while writing.

6. Clean/organize/pluck a hair: I mean really. This should go without saying. Be a writer with a messy room and a poky hair coming out of your face right now. Because that, after all, is who you are.

7. Stop to pitch this amazing thing you’re writing, RIGHT NOW. I mean come on. Again, this time is for writing. Pitching is a part of writing– but not this part. Plus, thinking about pitching something, as you’re writing it, will change the pitch (sorry, couldn’t resist that) of your writing. Subconsciously, your unique tone will morph into the tone you think the editors have in mind. So just keep writing and keep your mind outta the obviously forthcoming tidal wave of fame and money for one hour. Just one hour.

8. Go through and edit. You may start your writing hour that way, overlooking the three pages you’ve written before that you’re now starting in on again, and it can be a good way to get into the piece. But better to write like the wind, like no one’s watching, like no one’s editing, or ever will edit, or even read. Writing hour is for writing, making stuff to edit. When you are satisfied you’ve done a good chunk, maybe then you can edit.

But it’s like this: when you leave the house without expectation, you look great, you look you, and it wasn’t hard, right? Yet when going to some meeting or event where you’re trying to present yourself a certain way or even just Look Nice, it’s so much harder and you (I do, anyway) inevitably end up looking less panache-full, less easily stylish, less You. The best writing is from that same easy You-ness. Yes, with editing. But let the ease come out first.

Oh, and while we’re at it, here are just a few things you can do during your precious hour of writing.

1. Start a new blank document to write about something else you’ve just thought about.

2. Stop to put on slippers because your feet are cold. Totally acceptable.

3. Stop to say one sentence to your housemate, but then give them a look after you’re done, to make them stop saying their sentence in return, because, like you told them earlier, you are just going to write for one hour straight and you can’t waste time talking.

And, woo! My timer has gone off and I’ve completed this and done work on two other pieces!

Time to go pitch this, and edit. All the writing I’ve done during this hour looks and reads like it was patched together and written by someone on their fifth day of train travel, with ADHD, on drugs. Which may be 100 percent accurate at times.

But at least I wrote: getting it down is the first part of all the work, the rest of which cannot be done with that first step. So get it down, regularly, even with misspellings, lack of total focus, and insanely circular logic. Just get it done– and then edit it, talk to your housemate, look up the right spelling of last names, get a snack, and then go be petty with glee on facebook.

We can do our life’s work for an hour. And the same tomorrow. 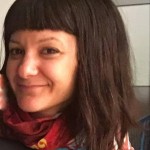 About the Author: Ellen Croteau