How do you start writing in a foreign language? Swear off writing in your own.

At least that’s what I did when a teacher — not the inspiring kind — decimated my love for both reading and writing in my last year of high school.

I grew up in USSR, the country best known in 1980s as both the “Evil Empire” and as the nation where Moscow’s subway often featured more readers than Lenin’s library.

I was no exception. By the age of 16 I read most of my parents’ 600-book strong library, I dabbled in poetry writing, and I had penned a few short stories. I didn’t think of writing as my profession, but I didn’t discount it either.

Until Svetlana Vassilievna, my Russian language and literature teacher, decided to embarrass me.

We called her Baba Yaga — after a Russian fairytale character who kidnapped children and threatened to eat them — for good reason. In class she tolerated no opposing arguments, discouraged creativity, and berated every mistake we made. During recess she preyed on us looking for transgressions of uniform, behavior, or both.

When one day she overheard me say that I wouldn’t need Russian literature in the university I was applying to, she decided to teach me a lesson. She began failing me.

After my mother, horrified at the prospect of an F on my school transcript, intervened, Svetlana Vassilievna offered a makeup opportunity. She had me stand up in front of the entire class, glared at me through her large, round glasses, and for fifteen minutes quizzed me about class struggle themes in Dostoevski, Tolstoi, and Mayakovski.

I wanted to die.

A change of perspective

When I came home that day I burned all my short stories, ripped up my poems, and decided there would be no more reading — or writing — for me.

Then I moved to the United States and had to include an elective in my pre-med curriculum. Creative writing was the only course I could fit into my schedule.

During the first few classes, I sat there perplexed: Not only did my fellow students engage in open discussions with the professor, speak their minds, and ask questions, but the teacher also gave actual instructions on the craft of writing. At the end of that semester I wrote a paper on Mrs. Dalloway and Taoism. I got a B+.

Since then, writing — but only English writing — has accompanied me through my master’s degree and several careers in non-writing fields.

In my free time I translated Russian poetry into English and wrote short stories.

When I moved abroad and couldn’t find a job, I began writing full-time. The result? A debut novel, several personal essays in national outlets, a screenplay, and a finished pilot.

I never went back to writing in Russian and although I still make mistakes common to non-native English speakers — “a” and “the” continue to elude me — I now write in English full time.

The following have been, and continue to be, invaluable in my journey as a writer in a foreign language:

1. An active community of writers

Ever since I began writing I’ve made sure, wherever I’ve lived, to get together with people writing in English on a weekly basis.

Not only do these groups guarantee a constant creative atmosphere; they also offer a continuous stream of writing samples I can read, provide input on, and learn from.

There’s also the added bonus of making friendships, but you probably already knew that.

If you can afford it, take one. Most likely it’ll be the best several days you’ll ever spend. You’ll learn from some great writers, have a chance to hear what they think of your work, and make new contacts in the writing world.

3. An aversion to cliches

If you hail from another country and have been speaking another language for most of your adult life, chances are you are not aware of cliches in English.

My first stories were littered with them. I couldn’t figure out how to recognize which phrase made a cliche and which one didn’t.

After struggling for a few years, I decided that the best way to avoid those pests would be to come up with a different turn of phrase for every potential cliche.

I read my favorite essays and stories with a pen in hand. Whenever I see a word I don’t know or a sentence structure that mesmerizes me, I record it. Then, either while walking or waiting for a bus or exercising, I practice making sentences with it in my head. Next time I write something I often discover that word or that structure has somehow made it into my narrative.

5. A dictionary and a thesaurus

There are moments when I’d be writing and suddenly instead of an English word my brain would produce a Russian word.

If after a few minutes of concentration I still cannot remember the English word I want, I open a dictionary (or go to Google translate) and look up the translation of that Russian word.

Then I check the thesaurus for the synonym that feels right.

And finally? Don’t wait for something inspiring — or someone inspiring — in your life to give you a push. It may just be the opposite that does the trick.

Are you fluent in several languages? Which do you prefer for writing? 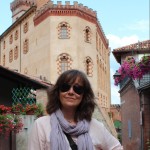 About the Author: Rebecca Strong

Rebecca Strong is a writer living in Madrid, Spain. Her debut novel WHO IS MR. PLUTIN? came out in 2015 with Curiosity Quills Press and her other work has appeared in Quartz, Writer’s Digest, and Publishers Weekly, among others.