Writing a Novel: 5 Lessons From One Author’s First Book Deal If you’ve ever dreamed of getting a book deal, don’t be dissuaded by the talk about how no major house is publishing debut fiction anymore, or that you need insider contacts to get published.

I got a deal with a top publisher within a year of starting my novel.

With some determination and a thick skin — I got rejected by 60 agents along the way — you can get published from the slush pile as well.

Here I share my best lessons learned on the journey:

1. The bigger your idea, the more you’ll be rejected

One of the biggest conflicts every debut novelist has to endure is figuring out how to approach your genre.

If you write a predictable novel — yet another damaged CIA agent story or young-adult dystopian fiction — you’ll find it hard to get published because you’re competing for the same audience as established authors in the genre.

On the other hand, the bigger and more unexpected your story, the less willing a major publisher will be to take a chance on it.

My novel, about a man confronting his questions about mortality, is less self-help and more of an adventure story. There is no established, clear-cut genre for such a book. As a result, I consistently got lukewarm responses from literary agents.

Both approaches are hard, and ultimately, you can only write what you can write. But if you do go with the latter approach of a big, unexpected idea, do know that there is light at the end of the rejection tunnel.

Identify literary agents who deal with high-concept fiction versus genre fiction on Publisher’s Marketplace, and query until you find a match.

Once you do, the agent will know exactly which editors to pitch your book to at the major publishing houses.

For perspective, it took me eight months of rejections to find my agent, but only six days after that to land multiple offers from the top-five publishing houses.

2. You don’t need a platform to get a literary agent

I’ve always had a corporate career, so I wasn’t exposed to the writing community in New York until I got a book deal. I’m glad I wasn’t, because I would’ve probably been sucked into wasting time on rite-of-passage activities I’ve heard other writers talk about — activities that don’t move the needle at all.

For instance, take the idea of building a platform.

I don’t think a random blog post here, one Facebook post there, and a few Twitter updates constitute a platform that will attract a major publisher. To build an authentic platform, you need to devote genuine attention to it and touch hundreds of people’s lives with your words. And that’s hard to do when you’re trying to write an impactful novel.

Hanging out at book readings with other unpublished novelists who are hoping to get noticed by agents or publishers is another killer waste of time. I advocate a rather monastic approach to meaningful fiction: Commit your full undistracted mental energy to it.

Make your novel and pitch shine so much that it stands out of the slush pile. Every editor will tell you that debut fiction eventually sells on the strength of the idea and the writing.

If you can build an authentic platform around it, that’s a nice bonus. But your platform should never come at the expense of your writing.

3. Your novel should combine meaning with entertainment

You’ve thought about your idea for years. You’re convinced it’s the one story that has to be told.

But it may be too meaningful.

I was so possessed with Eastern mysticism while writing The Yoga of Max’s Discontent that early drafts of my novel looked like a Ph.D. thesis on meditation. The result: Rejections.

My story hadn’t liberated itself from the author.

In subsequent drafts, I focused on the character’s journey from drug dens in the Bronx to hidden yoga ashrams in India. Without trying to communicate any message, I allowed his journey to open windows to new secret worlds for my protagonist — and for my readers.

Success immediately followed. Are you able to immerse your reader in an alternate reality, or is there too much of your own voice and your own motivation present in the story?

Good fiction liberates itself from its creator. It does have meaning, thanks to the protagonist’s lofty, all-consuming goal, but it’s simultaneously entertaining because it opens windows to exciting new worlds for readers.

Just think of Harry Potter, a story layered with meaning about a kid realizing the depths of his own potential, yet constructing an elaborate secret world right from the start. The moment I was able to combine the two, I got multiple agent representation offers.

4. Hiring a professional editor is the best money you can spend

Jake Morrissey, my editor at Random House, accepts fewer than 0.5 percent of manuscripts that land on his desk, despite them being vetted by top literary agents.

With odds like these, there’s zero room for error when your manuscript finally makes it to a top agent’s desk. That’s why I highly recommend hiring a professional editor to polish your manuscript at two stages of the writing process:

Like in any endeavor, in writing you have to spend money to make money. Luckily, it doesn’t have to be $50,000 on an MFA.

I spent $700 on a developmental editor after two drafts of my novel, and then $2300 on a line editor after I got a stream of rejections from literary agents.

Not only did they both shine new light on my manuscript; they also taught me a lot about the craft of writing which will guide every book I write in the future. My publishing deal was an excellent return on the investment.

If you’re trying to break into the “A” league, don’t rely on friends and family. Invest in a professional editor to elevate your game.

5. Modify your query and manuscript when it’s not working

But if you’re querying the right people and getting rejected again and again, you have to consider the possibility that your query or your manuscript may require work.

The moment I changed a significant portion of my query, my response rate doubled. After completely revamping the first 30 pages of my manuscript so readers were thrown into the story’s secret world right away, I got three agent representation offers in just one week.

Based on my trial and experimentation over eight months of querying, I’ve arrived at the following method:

How to survive the querying process

Now, a final tip to speed up the inevitable rejections in the query process: Create a sense of urgency in the submission process.

This is the exact follow-up letter I’d send to all the agents in my round of 12 if I got a bite from another agent:

No intention to hurry you whatsoever as I know it takes more time to evaluate a query and I fully respect your process.

I just wanted to keep you in the loop that two of the agents I sent my first set of queries to responded with a request for a full manuscript, somewhat surprisingly for my understanding of the longer timelines in the U.S. publishing process.

Since you were at the top of my desired list because of your confluence of interests in commercial fiction and religion/spirituality, I was really eager for your response. If at all your time allows, I would be very grateful if you could tell me of your interest.

Eighty percent of the time, agents would respond immediately, cutting down wait time and getting more eyes on my manuscript.

Ignore the rules that say you need to wait six weeks or six months before following up with an agent.

Agents are drowning in queries. Create your own hype — your own scarcity triggers — to rise to the top of the pile. This principle may well be the key to the whole journey of getting a top debut publishing deal in record time.

Ignore the rules. Write a big story. Believe in your own hype. Create scarcity. Selling debut fiction is hard, but it’s also democratic — you can break in on your own steam!

Novelists, what are the most important lessons you’ve learned on your writing journey? 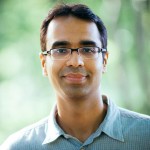 About the Author: Karan Bajaj

Karan Bajaj is the author of The Yoga of Max's Discontent. You can access his step-by-step methodology from idea to writing structures to query letters in his writing course.